Milyma on
collaborating with Actress

The Birds of Paradise Foundation is a charitable organisation registered under Dutch law. Audited accounts for 2021 can be found here.

Birds of Paradise wants to offer a state of the art international platform on the verge of indie pop music, EDM and contemporary classical music with all sorts of connections to other progressive (stage) disciplines and genres for the benefit of:

It’s hard to pin down Darren Cunningham: every move the musician makes as Actress is a completely unexpected one. Whether he changes timbre and colour completely, or reaches heights of a satellite in just a whim: the Briton always proves to be prolific in delivering innovative sonical work. Take for example 2018’s LAGEOS, the classical-like mixture of re-imagining previously released work like experimental cornerstone Hubble or creating improvised new compositions in collaboration with the London Contemporary Orchestra. Together with abstract Swiss R&B singer, producer and composer Milyma, Actress will create a whole new set of musical textures and compositions. They might sound as organic as Cunninghams latest offering Karma & Desire (2020), but they will be in fact partly generated by the do it yourself-AI programme Young Paint, enriched by the piano treatments of Milyma. Be prepared for a flight onto duality, fluid but completing energies and mental processing systems, filled with unexpected turns, sudden whirlwinds and thrilling landings.

House visual designer of Birds of Paradise Mees Joachim, in collaboration with Actress, developed a t-shirt design exclusively for the festival. The design is based on visualized dream states of Actress and soundwaves of the music that he will use for his set for Birds of Paradise. Mees Joachim: “It’s become a bit of an amalgamation of many influences, but the main keyword would be ‘technotropic‘. Composition wise it’s heavily based upon tourist-shirts of the local wildlife in the Caribbean. Visually it’s quite post-internet.”

The t-shirts are for sale at the merch counter in Park 6 of TivoliVredenburg. 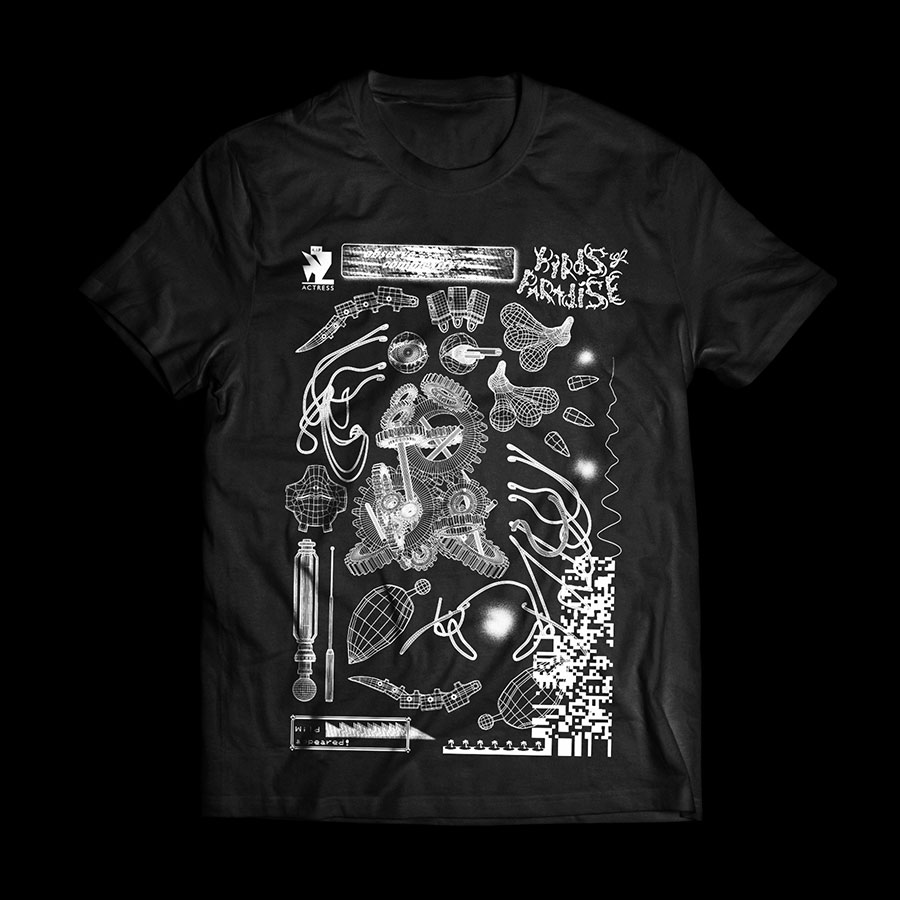 What is a system? Systems can be defined in various ways depending upon how they are being used and who is using them. For example, within the discourse of communications theory a system is defined in terms of the flows of information. For Birds of Paradise and within my work in general, laid within the music is a code which is related to the identity of self-recognition, and my methods of hypothesizing musical outcomes and songs are achieved through the synthesis of musically technological systems.

As well as considering the flows of information and data, I am now also looking deeply at the flows of energy that combine mythical contexts (R.I.P), spiritual intelligence (A.Z.D), occult trending (Splazsh) as a sub future doctrine that enables new systems of belief.
One of the major systems of belief within technology challenging our idea of beauty within art is the use of Artificial Intelligence. I refer to it as the stealth toolbox and use it as such with the system I have created called Young Paint. A project that started with the Roland 303 Groove box and has been scaled into an intricate ecosystem of computer operating systems.

The constant challenge is to create a system that is stable and can be at the same time open and closed. Closed for the lone operator, but open to accommodate collaboration.
In my work and when conceptualizing albums and sound & art commissions, I consider music as a universe that starts with the Self. Male, female, non-binary and fluid, and yet despite the shifting social expectations when speaking of gender, there is an aspect to the work which is fixed. This is symbolic, archaic and primitive. A cable may be specific in that it’s either a male connection or a female connection, but only when connecting the right cable will you create the flow of data, information and energy required to achieve the birth of a new idea or sound. However, the process after this point becomes fluid, both binary and non-binary simultaneously and at rapid speeds and exchange rates.

The same could be said for social media as a system. One of the darker sides of this system is the activity of trolling and racism, which in its nature transfers an energy connected to effecting or disturbing an individual’s mental health. The German sociologist Niklas Luhmann claimed the systems theoretical approach deals with everything social and not just sections like the particularities of modern society and patterns of interaction. My approach to AI is both related to the Anima and the Animus, described in Carl Jung’s school of analytical psychology as part of his theory of the collective unconscious. Jung described the animus as the unconscious masculine side of a woman, and the anima as the unconscious feminine side of a man (Actress), each transcending the personal psyche.

This presentation and collaboration with multi-talented Milyma will look at creating Shadow archetypes via Autotune and Vocoding of the voice. It will look at the reflection of mental health by using comments posted on YouTube by ‘fans’ as a negative (-) and positive (+) source feed, using this text energy to re-create and craft songs using a vocalised AI system data bank. And finally, this information will be filtered once again through the Self and the human vocal system.

I will further explore Dream States and the Sonic Hallucinatory colours and frequencies that I experienced when suffering from Ackee Food poisoning as a teenager whilst on holiday in Jamaica. This induced a perceived meeting with my spiritual ancestry, and the fluttering AMSR rhythms of the Dr. Birds wings bringing me back to worldly consciousness.

There is still a really sterile and precise vision of what classical music should sound like or not, compared to other genres. So I chose songs which remind me personally of classical music or have elements of it, but don’t necessarily are classical at all.

Milyma on collaborating with Actress

Milyma on collaborating with Actress

“For some time Darren (Actress) and I have been sending music ideas back and forth and we really enjoyed the output and the result of our different musical approaches. The way we approach writing music for this project, is so different from each other and that’s just what makes it so interesting. It gives me new ways of thinking about music. Unlike Darren, I don’t have a lot of experience in collaborating with other musicians. I’m always fascinated how you inspire each other to new approaches and how it makes a joint process possible.”

Simultaneously with the arrival of Actress, Artificial Intelligence grandmaster of ‘coincidence music’, the exhibition Toeval bestaat niet runs in Museum Speelklok. An expo about AI in music avant la lettre, you could say. And because coincidence does not exist, you can visit this exhibition around the replica of the Componium until April 1 for free by showing your concert ticket for Actress.

The brilliant instrument builder Diederich Nicolaus Winkel completed his masterpiece in Amsterdam exactly 200 years ago: the Componium. A mechanical instrument that makes music by chance and is now on display for the first time in Museum Speelklok. Unfortunately, the 3.5 meter high original does not work, but Museum Speelklok has managed to create a mini version especially for the retrospective exhibition.